The IUF and Meliá Hotels International, the Spanish-headquartered hotel chain with over 38.000 employees worldwide, have signed an agreement confirming Melia's commitments to respect fundamental rights at work, including but not limited to freedom of association and collective bargaining. The agreement applies to all hotels under Melia's brands, whether they are owned, managed or franchised.

The international agreement signed on December 9, 2013 by Meliá CEO Gabriel Escarrer (at right) and IUF General Secretary Ron Oswald provides for a continual and progressive dialogue between Meliá management, Meliá employee representatives and the IUF. 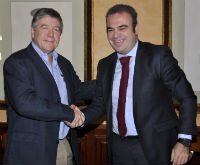 "Our Company carries out its activities in some 40 countries, and managing diversity, including in the world of work, is a great challenge. That is why the agreement we are signing today with the IUF-UITA is an important step in our relations with Meliá's most important interest group, its more than 38,000 workers worldwide", said Meliá CEO Gabriel Escarrer.

IUF General Secretary Oswald commented, "This agreement provides a concrete tool to help ensure that Meliá workers across the world have access to their fundamental rights. Meliá's commitment to respect these rights is evident at the highest level of corporate management. With this agreement and the mutual engagement it guarantees we will be able to assure that Meliá's commitment to a culture of respect for human rights will be reinforced wherever the company operates."