Support at home and abroad continues to build for the struggle for trade union rights at Nestlé factories in Indonesia and Pakistan.

Khanewal, Pakistan, hundreds of trade unionists rallied on February 9 in support of the fight for permanent employment and trade union rights for 246 long-serving contract workers at Nestlé's Kabirwala milk factory, 100 of whom face criminal charges for having asserted their rights. The campaign has had a huge impact in the community, prompting the local authorities - including the labour commissioner responsible for Kabirwala - to meet with the workers' Action Committee and the IUF-affiliated National Federation of Food, Beverage and Tobacco Workers, which is supporting the struggle.

On February 12, Mehek Butt, chairwoman of NFFBT, led a mass demonstration by the Women Workers Federation in Multan in support of the Nestlé Kabirwala workers.

Action moved to Jakarta, Indonesia, on February 15, when hundreds of members of the IUF-affiliated unions FSPM (hotel federation) and SPMKB (Ketjap Bango Independent Union, food) rallied at the Hotel Indonesia Circle in the heart of Jakarta and marched to the Nestlé Indonesia Head Office. The demonstrators called for the immediate reinstatement of the 53 dismissed members of the SBNIP at Nestlé's Nescafé factory in Panjang, where they were sacked after an agreement was signed with the company ending their strike in October.

The same day, February 15, union activists in New York showed their solidarity with the Nestlé workers in Panjang and Kabirwala at Nestlé's upscale Nespresso boutique in Manhattan, New York. RWDSU activists distributed leaflets to the customers and spoke to the Nespresso manager, calling on Nestlé to reinstate the unfairly dismissed union members in Indonesia and to start negotiating the employment situation of the Kabirwala casual workers. 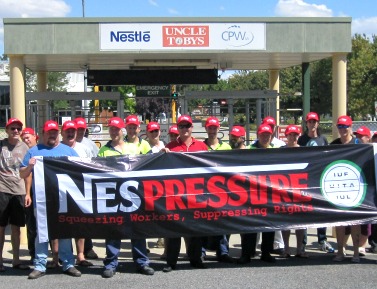 Two days later, on February 17, Australian trade unionists showed their solidarity when members of the IUF-affiliated National Union of Workers working at Nestle's Uncle Toby's factory in Wahgunyah, Victoria, held a protest action outside the factory, calling on Nestle with the same demands now heard around the world.

On February 20, in Panjang, IUF-affiliated independent food unions joined the SBNIP and dismissed workers' family members for a rally at which demonstrators formed a ring around the factory from 9:00 AM until 2:00 PM to deliver a message to the company that the dismissed union members and their families refuse to surrender their rights.

The demonstration continued the following day in Panjang when 300 trade unionists again ringed the factory and rallied until 4:00 PM. At the same time, hundreds of FSPM workers demonstrated in the center of Jakarta and marched to the Nestlé head office, chanting "Stop Nespressure! Reinstate the 53 workers at the Panjang factory! Recognize and respect union rights!"

FSPM President Budi Triyanto told the crowd: "Everyone soon will know that Nestlé, the world's biggest food company, is treating workers badly. Each cup of Nescafé contains violation of workers' rights, union busting, and the destroyed futures of the workers' children." 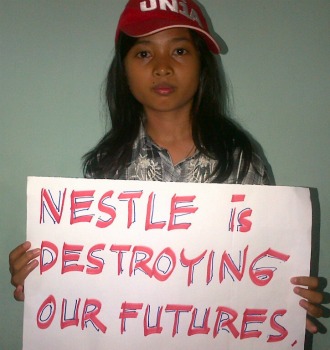