The human resources manager at Nestlé's Kabirwala dairy factory has been ordered to appear before the Punjab High Court on February 15 for repeatedly showing contempt for court orders to reinstate the unfairly terminated President of the Nestlé Kabirwala Workers Action Committee, Ashfaq Butt.

The HR manager's contempt citation is one in a long series of violations committed by Nestlé over the course of more than 2 years as part of management's brutal response to the contract workers' struggle for their rights.

Butt, a machine operator with 5 years' service as a contract worker at the Kabirwala factory, was terminated on October 14, 2010 - 'Because you are involved with the union and provoking workers', according to the shift manager (see Jail, bail, threats and dismissals as Nestlé Pakistan dairy workers fight for their rights). 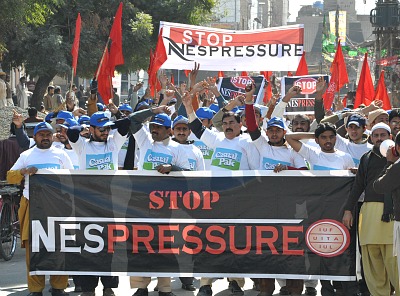 On November 6, 2010 the Punjab labour court ordered his reinstatement with full back pay. When he presented himself for work at the factory, the HR manager met him at the gate, telling him "You will not work in this factory". Management then appealed the reinstatement order, and appealed again when it didn't get the decision it wanted. On April 11, 2011 the Punjab High Court ordered his reinstatement. Management again refused to let him on duty. On May 11, the HR manager appeared in the High Court and told the judge that the company was prepared to reinstate Butt. When he presented himself for work, he was again turned away.

In July, the labour court confirmed the initial reinstatement order. Management again refused to comply. The Punjab High Court has summonsed the manager to appear in court on February 15 - on a contempt order dating from last September.

Nestlé has not only repeatedly violated court orders, Pakistan law and international standards and Conventions in its ruthless drive against the contract workers and the union which is supporting them. The company has falsely implicated Butt in four fabricated police cases, and he is only free on bail. Nestlé continues to pressure workers into withdrawing their legal claims for reinstatement, has created over 100 permanent positions for workers who do not support the Kabirwala workers' struggle for their rights, and is promoting a rival group of contract workers with an eye to provoking clashes in order to fabricate still more criminal cases. 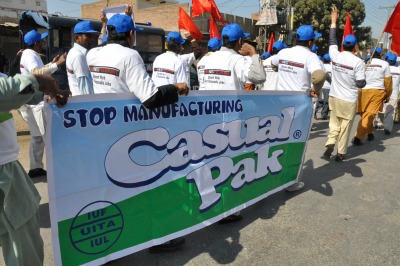 On February 8, the National Federation of Food, Beverages and Tobacco Workers (NFFBTW) held a press conference at the Multan Press Club to reaffirm their full support for the Kabirwala struggle and announced a new round of national protest actions.