two-thirds of them women, rallied on the Nowera Nuddy tea estate in West Bengal, India on January 16 to launch a new stage in their campaign for their rights after management failed to respond to a January 15 deadline to meet their long-standing demands. Nowera Nuddy Tea Estate is owned by Amalgamated Plantations Private Limited, a company 49% owned by Tata Global Beverages, which is a wholly-owned subsidiary of India’s powerful Tata Group conglomerate.

Tata's Tetley Tea is 100% Tata-owned, and sources tea from Amalgamated - though not, it claims, from Nowera Nuddy, an argument it has employed to excuse itself from all responsibility for brutal management practices at Nowera Nuddy. Tetley is the second biggest-global tea brand, and a leading member of the UK's Ethical Tea Partnership.

The Nowera Nuddy workers, organized in the Progressive Tea Workers Union (PTWU) and supported by the IUF, are still struggling with the brutal consequences of a punishing 3-month lockout inflicted on the estate, where 1,000 workers and their families workers not only work but also live. For these three months, management denied the workers all wages and food rations.

Management imposed the September-December 2009 lockout in response to a protest in August that year over the mistreatment of Mrs. Arti Oraon, a 22 year-old tea garden worker who was denied maternity leave and forced to continue work as a tea plucker despite being 8 months pregnant. 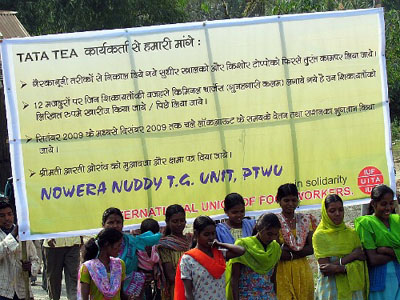 Management’s “domestic enquiry” into the suspensions, conducted in a language the workers do not speak and in which they were not allowed to defend themselves or present evidence, confirmed the suspensions. As a result of a campaign on the estate with international support from the IUF, six of the 8 were eventually reinstated in their jobs, but two workers, including Mrs. Oraon’s father, were sacked. And in April last year, in response to management complaints, police visited the plantation to announce that arrest warrants had been sworn out for Arti Oraon and 11 other worker activists, including the 8 already suspended workers, on charges, including theft, grievous bodily harm, unlawful assembly, criminal intimidation and unlawful confinement.  These charges, which can carry prison terms of seven years and more, remain in force.

Repeated attempts by the union to secure the workers’ main demands through negotiations with management leading to a formal agreement have failed to yield results. Management has even threatened the union for their involvement with the IUF, and last year evoked the possibility of a renewed lockout.

For this reason the workers’ rally yesterday culminated in an assembly where they reiterated their determination to fight for: 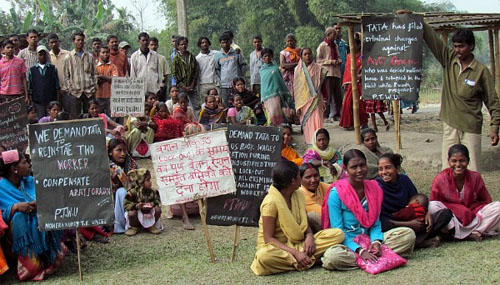 The Nowera Nuddy workers and the PTWU have the full support of the IUF in their ongoing struggle. We will be doing everything possible to build international pressure to ensure that collective punishment and vicious retribution cannot be inflicted with impunity.

You can support their struggle by sending a message to Tata/Tetley – the power behind local management – telling them to meet the workers’ demands NOW!

You can also use the features provided on the Tetley Tea website to send the company a message, or use the freephone number provided to give them a call!