Workers at Roquette America’s corn milling plant in Keokuk, Iowa, represented by the BCTGM,  have been locked out of their jobs for over 2 months – and the union is calling for international support to end the lockout as it moves into month 3. Roquette Frères is a French-based manufacturer of starch and sugar derivatives and polyols, which have a broad range of food, beverage and other manufacturing applications.

The fourth largest global company in its sector, with 18 plants worldwide,  family-held Roquette is notoriously secretive about its finances and general operations. This doesn’t prevent them from boasting of their market capitalization (over €8.8 billion, or some USD 11.5 billion) on their corporate stationary just below the address and phone number. A sample is visible on the letter the company CEO wrote last year to UN Secretary-General Ban Ki-Moon when they joined the UN global Compact and committed to respecting labour rights and integrating them along with other principles into the “strategy, culture and day-to-day operations” of the company.

Management at Roquette America apparently hasn’t been brought up to speed on this. BCTGM Local 48G represents 240 workers at the Keokuk plant, which manufactures starches including the high-fructose corn syrup sourced by companies including Coca-Cola and Heinz. Negotiations for a renewed contract officially began on September 14, with the company demanding, among other major reductions and concessions, the right to hire temporary workers at less than half the wages of the permanent workforce with no benefits, an end to seniority in layoffs, an end to overtime for weekend work, the elimination of sick, personal and maternity leave, enormous inceases in worker contributions for health care, the end of the company pension scheme and a 4-year wage freeze.

When the members rejected these proposals, the workers were given a 24-hour ultimatum to approve the company’s final offer – and locked out of their jobs when the contract expired on September 28, despite the union’s offer to continue working under the terms of the expired contract while negotiations continued. 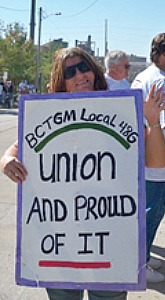 The Roquette workers are the latest union workforce to be attacked by a vicious corporate offensive to profit from high unemploymentby rolling back wages and conditions at a time of healthy profits and cheap credit. Despite sub-zero temperatures, members of Local 48G have maintained a round-the-clock informational picket at the plant. They are fighting for the rights of current and future Roquette workers. The union has two demands: an immediate end to the lockout, and an unconditional return to negotiations. You can support their struggle by clicking here to send a message to French and US management.

We thank you for your solidarity and support.