On 7 October over 200 workers and their families – wearing caps from their Swiss sister union UNIA - rallied outside the Nescafe factory in Panjang, Indonesia, to denounce the corporate social irresponsibility of the world’s largest food company.

In its press release the union condemned Nestle Indonesia management’s blatant violation of ILO conventions 87 and 98 on collective bargaining and freedom of association by creating a fake union and pressuring workers into joining the fake union, while threatening those who want to join the real union, SBNIP.

The protest is the 44th rally organized by the IUF-affiliated SBNIP in Panjang during its more than three-year-long struggle. The union declared that protests will escalate in the coming months as part of the global Nespressure campaign.

Meanwhile, in Switzerland, a group of about 30 activists and supporters from UNIA and the IUF put up banners and handed out leaflets in front of the Nespresso shop in Geneva in support of the Nestlé Panjang workers’ struggle for trade union rights. Amongst the supporters were a group of international trade unionists attending an IUF meeting in Geneva. 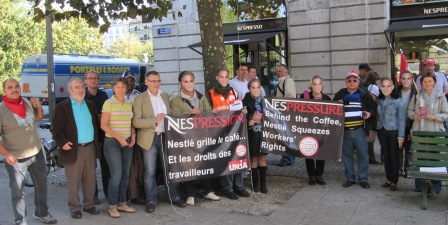 Many of the protesters were disguised as actor George Clooney, the “face” of Nespresso in Europe.

Some 80 signatures were collected on a petition handed over to the manager of the Nespresso shop, who agreed to send them by express mail to Paul Bulcke, Nestlé CEO. 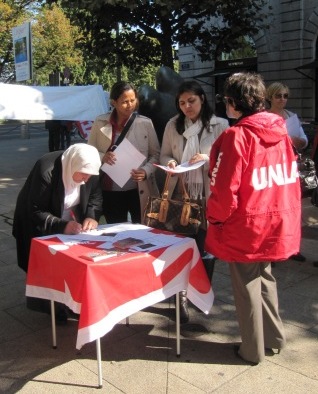