Profit Indigestion at Dr. Pepper/ RWDSU/UFCW on Strike at Mott's

Over three hundred workers at the highly profitable Mott's plant in Williamson, New York are on strike against deep cuts in pay and benefits, and the employer’s refusal to bargain a fair contract. Mott's is produced by Dr. Pepper Snapple Group (DPS), the North American beverages division spun off by Cadbury Schweppes in 2008.

DPS has been enjoying record profits, earning USD 555 million and increased their market share in a highly competitive beverage sector. Shareholders have seen the company's stock soar and the CEO has given himself a 113% compensation increase to USD 6.5 million annually.

DPS implemented an across the board reduction of USD 1.50 per hour, eliminated the pension, increased employee health care contributions and cut the 401k benefit by 20%. Workers strongly rejected these demands and authorized the union's negotiating committee to call an unfair labor practice strike, which began on May 23

Strikers have been traveling the country telling their story and letting DPS know wherever DPS is, Local 220 members will follow.  In Texas, RWDSU members turned out for the annual shareholder meeting on May 20 (listen here) to question the CEO and Board members about the rationale behind aggressive pay cuts at a time of record growth, profits and executive compensation. In response, they were told they were overpaid - despite the fact that their pay is in line with the average wage in their industry and geography. 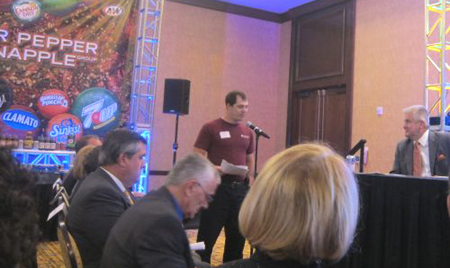 In response to union members' questions at the annual shareholder meeting, CEO Larry Young (seated at right) assures shareholders that by slashing wages and benefits the company is acting in the interests of all stakeholders.

DPS also failed to explain how they reconcile the clear conflict of interest and breach of ethics posed by the membership on the DPS Board of Anne Szostak. Szostak is also on the Board of Directors of the SFN Group, whose Spherion supplies temporary agency workers (and potential strikebreakers!) to the Williamson plant. DPS Corporate governance Guidelines explicitly preclude such relationships.

Strikers and supporters have taken their message to consumers in Galveston, TX and St. Louis, MO.  Picket lines were extended to another Mott’s plant in Aspers, PA.

The Mott's workers are standing up to rampant corporate greed-and holding the line for decent pay and  conditions where they work, in their community and for US  food and  beverage workers as a whole. They tell their story on video here.

You can support their struggle - click here to send a message to Mott's telling them to stop assaulting living standards and start bargaining in good faith!