Since April 21 hundreds of workers at the Horlicks factory in Nabha in Punjab state in northwest India, have held continuous protest actions against the company’s refusal to grant permanent employment to casual workers employed on a 'temporary’ basis for more than a decade.

The Nabha factory, one of three factories in India owned by the pharmaceutical, health and personal care products giant GlaxoSmithKline (GSK), produces nutritional malt drinks under the global brand Horlicks. Alongside 1,150 permanent workers there are 450 directly employed casual or ‘temporary’ workers and over 300 contract agency workers producing bulk Horlicks at the Nabha plant, with packaging then outsourced to 12 local companies operating across the country as “co-packers”.

In its recent collective bargaining proposal to GSK management, the Milk Food Factory Workers Union included the demand that 287 ‘temporary' workers be made permanent since they have worked for more than 10 years at the factory. With management deliberately imposing breaks in their employment every three months, the actual number of years of employment at the factory adds up to more than 15 years!

The union, which represents the 1,150 permanent workers, backed up this demand with an extensive survey of the GSK Nabha factory operations showing a persistent shortage of 350 workers. The union argued that the factory requires an additional 350 permanent workers, which should include the 287 who have already worked there for more than a decade.

An additional 350 permanent jobs is something GSK India can well afford since India is GSK’s biggest market worldwide for Horlicks products (where Horlicks malt drinks are sold as a food supplement) and Horlicks dominates more than 50 per cent of the health food drinks market in India. Some may even think that creating permanent jobs could lend some credibility to GSK’s claim that its mission is "to improve the quality of human life by enabling people to do more, feel better and live longer”....

Yet management at the Horlick’s factory refused to even consider the demand, resulting in a complete breakdown in negotiations. Instead of resolving the matter at the bargaining table GSK management instead sought to restrict workers’ freedom of assembly and freedom of speech by requesting a court injunction banning union activities within half a kilometre (500 metres) of the factory gate. Though the union challenged this in court, it only succeeded in having the injunction reduced from 500 metres to 100 metres. 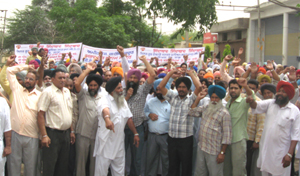 Faced with a ban on union gatherings - including gate meetings - within 100 metres of the factory and management’s refusal to negotiate, the GSK Horlicks workers have launched a series of protest actions and rallies throughout the city. This campaign against GSK’s abusive precarious employment practices by the Milk Food Factory Workers Union is supported by the Nestle Moga Employees Union which is a member of the IUF-affiliated Federation of All India Nestle Employees.