Some 1,200 subcontracted workers providing catering and other services to the Algerian state petrochemical giant Sonatrach are in the third week of their difficult strike and remain camped out in front of the company headquarters in Hassi R'mel.

Click here to send a message to the government of Algeria

Hugely wealthy Sonatrach is one of the world's largest petrochemical companies and Hassi R'mel a major hub for oil and gas exports, including to Europe.

Employed by 3 private catering companies - Bayat, Saha and Cieptal - the employees work 6 weeks straight before having a 2-week break (Sonatrach employees work 4 weeks on, 4 weeks off). Their salaries in many cases fall below the national minimum wage, and in a month of 31 days they are only paid for 30. They complain of degrading and humiliating living and working conditions: substandard food, inadequate water, poor accommodation and hygiene, unlimited working days in sweltering heat. 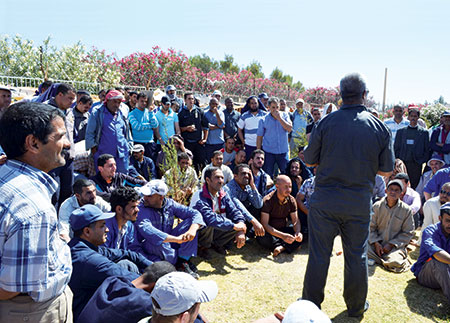 Protests began in March. On April 20 the workers took industrial action - and an agreement was signed the same day with representatives of the company and the local authorities agreeing to their demands as of May 1. The terms of that agreement were not implemented. Workers launched a second strike on May 29. The companies' response was to dispatch hundreds of strikebreakers - who refused to work out of solidarity with the strikers - and to move to have the strike declared illegal. The action became a mass hunger strike, in the course of which many workers required hospitalization.

The workers have ceased the hunger strike but continue their occupation in front of Sonatrach. They demand the salary increase set out in the Prime Minister's decree of March 11, 2013, stipulating a wage to subcontracted employees of 80% of equivalent Sonatrach workers; a work schedule of 4 weeks followed by 4 weeks of rest; and implementation of the improvements agreed to by the company on April 20.

Act now! Click here to send a message to the government and the companies.