Guests at the Hilton Conrad Rangali Islands Resort in Maldives pay 1,000 dollars a night to stay in luxury villas located on two private islands, where they can choose from "seven world class restaurants including 'the world's first all-glass undersea restaurant serving contemporary cuisine". "For the ultimate dining experience" guests can order a private beach dinner with their own chef and waiter. But conditions are less than luxurious for the workers who serve them. 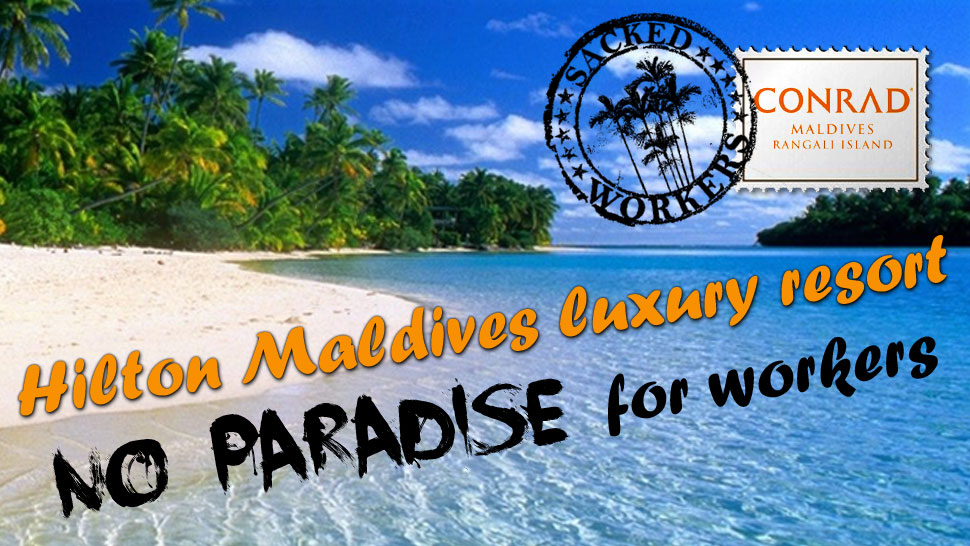 Last year, some 350 workers held a peaceful work stoppage to highlight their longstanding demand for a clear reckoning of the service charge which makes up a crucial l part of their pay. Since 2009, the IUF-affiliated Tourism Employees Association of Maldives, TEAM, had attempted unsuccessfully to raise the issue with management. When management gave assurances that they were prepared to discuss the issue, the workers returned to work.

Twenty-nine workers were then terminated. Union supporters were at the top of the list, which included employees with 10 or more years of service. The ostensible reason for the dismissals was a projected slowdown in business in the second and third quarters of 2011. In fact, tourist arrivals into Maldives grew significantly in this period. The real motivation for the dismissals was to bust the union's activist base

Twenty-two workers challenged their dismissals at the Employment Tribunal. In February, the Tribunal ruled that the mass firings were unfair, and ordered management to reinstate the workers within 10 days with full back pay.

The workers are still waiting. Management refused to comply with the court decision, and then appealed it. In August, the IUF wrote Hilton Worldwide Resorts management, urging it to reinstate the 22 workers in compliance with the court order and to enter into negotiations with TEAM. Hilton has not responded. Workers face a long wait at the appeals process, which is only now getting underway.

The workers have been more than patient.

Click here to send a message calling on Hilton management to reinstate these 22 workers who stood up for their rights and recognize their union!