Unions representing poultry processing workers in the United States have spoken out strongly against a proposed new rule being promoted by the industry to replace government inspectors with industry “self-inspection” and permit significant speedup of the already dangerously fast line speeds at which chickens are processed.

Under the proposed change to Food Safety and Inspection Service (FSIS) rules, line speeds could increase from the current 80-140 per minute up to 175 birds per minute, while at the same time assigning workers the task of “inspecting” each bird! The rule change is being promoted as a “Public Health-Based Slaughter Inspection System” despite the epidemic of worker injuries, high levels of contaminated product and a mountain of evidence linking processing speeds to high rates of accidents and crippling repetitive strain injuries.

The UFCW, the largest union representing US poultry workers, has sharply criticized the FSIS for including in the proposed rules their advocacy of greater productivity and flexibility that would benefit companies while excluding from consideration the impact on workers from the increased line speeds.

UFCW International President Joe Hanson has called on the government to shelve the proposed rule changes pending a comprehensive study of workplace health and safety in the poultry industry, and emphasizes that “The only way to ever truly guarantee safe food is to have safe workers.” (The UFCW statement on Line Speeds, Worker Injuries and Food Safety is available here)

In Australia, the National Union of Workers (NUW) is building on their successful strike last year against massive casualization at a Baiada Poultry site and the launch of their "Better Jobs 4 Better Chicken" campaign aimed at winning permanent work, safer workplaces and the production of better chicken.

NUW has now published the results of their worksite survey. The report (available here) emphasizes the huge costs to workers and consumers resulting from the industry’s relentless drive to lower labour costs. Not only are food poisoning illnesses and deaths on the rise in Australia, with most of these resulting from the salmonella and campylobacter bacteria which are mainly found in chicken. The report highlights recent research demonstrating that the impact of these two bacteria is far greater than the fatality figures alone express: exposure to these two bacteria can triple the average person’s chances of dying from disease or any other condition within a year.

The report contains evidence of massive outsourcing at Baida (Australia’s largest producer) and other companies through contracting and other employment outsourcing schemes, and links this to unsafe and working conditions and a rising incidence of contaminated product. Indirectly-employed poultry workers, in addition to working for poor pay under dangerous conditions, are typically undertrained, transient, and much more likely than their directly-employed counterparts to be killed, injured or made ill on the job. Among the key policy regulations set out in the paper is the demand for strict regulation of indirect labour. For the NUW, better workplaces are the indispensable basis for better chickens. 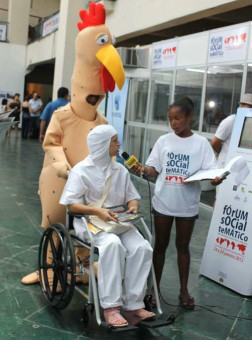 In Brazil, where occupational injuries are devastatingly high, the struggle to slow down the lines has been at the center of the campaign by the IUF and its affiliates to strengthen union organization and change the way the poultry industry operates. Line speeds are among the highest in the world, while low production costs have positioned Brazil as a major export platform. The recent merger of Sadia and Perdigao has resulted in the creation of a new company called Brasil Foods (BRF), which now controls 25 per cent of the global poultry market.

This year, the National Confederation of Food workers (CONTAC) took their campaign for decent work in the poultry industry into the Porto Alegre Thematic Social Forum, convened from January 24-29 to prepare for the Rio+20 meetings.