As Nestlé shareholders prepare for the annual shareholder meeting on April 19 Nestlé watchers should note that on April 6 a court in Kabirwala, Pakistan issued an arrest warrant for a manager named Jahangir at the labour contractor which has been supplying hundreds of contract workers under abusive conditions to Nestlé's milk factory in the town.

Abuses by the labour contractor - a crucial component of the Nestlé 'supply chain' - are part of a pattern of lawlessness and lies which have also seen the human resources manager at the plant cited for contempt by the Punjab High Court for repeatedly failing to comply with court orders to reinstate the unfairly terminated President of the Nestlé Kabirwala Workers Action Committee, Ashfaq Butt.

Last August Jahangir registered a phony complaint with the local police against Butt and four other contract workers (one of a series of management provocations) who have been struggling to claim their legal right to permanent employment (Butt explained the long ordeal in Jail, bail, threats and dismissals as Nestlé Pakistan dairy workers fight for their rights). Butt and the others are still only free on bail while waiting for Nestlé to withdraw all the charges it has filed (some 80 charges remain, despite Nestlé claims to the contrary).

However Jahangir failed to appear in court on April 6 after explaining in session the previous day that the matter had been resolved. The angry judge has therefore issued an arrest warrant, declaring "These people file a fake police complaint and then tell us the matter is resolved but have no interest in completing the legal process."

Throughout the ongoing struggle for employment rights at Nestlé Kabirwala, Nestlé has shown contempt for the courts and for the truth. Nestlé management in Vevey has gone through similar contortions in attempting to explain the arbitrary firing of 53 union members at the Nescafé factory in Panjang, Indonesia, including alleging that the strike by the union was "illegal" (it was not). The handful of union members who survived the wave of arbitrary firings have come under enormous pressure to surrender their rights.

Nestlé produced an annual report for the shareholder meeting vaunting the achievements of its Human Rights Working Group and claiming that the company implements its human rights responsibilities globally through its human rights and labour practices.

As usual, protestors espousing various causes - many of them good ones - will gather at the shareholder meeting. However the IUF won't be there, for two reasons. 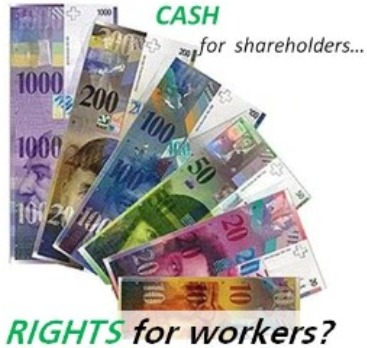 First, the shareholder meetings have rarely been a forum for meaningful discussion - the rights issues which ought to be on the agenda (like basic rights in Nestlé workplaces like Panjang and Kabirwala and elsewhere) unfortunately fail to gather significant support from investors, although that can change.

Second, and more importantly, the IUF and Nestlé have established a framework, based on recognition of the IUF, for resolving the kinds of disputes which continue to simmer in Indonesia and Pakistan. We therefore count on the company to take corrective action when trade union rights are violated. We expect this commitment to fulfill its promise, and therefore say:

Stop Nespressure! While the shareholders prepare for their celebration,

calling on the company to reinstate unfairly dismissed union members in Indonesia and provide permanent employment to contract workers in Pakistan who have claimed their legal rights.