Following the successful first-ever 24-hour national strike at Unilever UK last December 9, unions at Unilever's 13 UK sites have voted to launch a new round of strikes lasting up to 12 days beginning January 17 in the escalating fight to reclaim their final salary-based pension scheme - and showed their resolve with an energetic protest outside the company's London headquarters January 10.

The final salary pension scheme was closed to new entrants in 2008, ostensibly to preserve the benefits of the existing 5,000 members. But as of January 1, 2012, all employees still on the older plan were moved to a new, inferior scheme - with benefits on average 20% lower and for some as much as 40% less.

Last year, while discussions on the pension scheme were ongoing, unions were suddenly informed that Unilever has implemented a global policy of moving from defined benefit schemes, where these exist, to defined contribution schemes. In an official statement of July 21, the Unilever European Works Council pointed out that decisions regarding UK pension schemes were being implemented in the name of a global policy but that employees, who were also being told that pensions were a purely national issue, had not participated in any negotiations on this issue nor even, in the case of Europe, been 'consulted'". 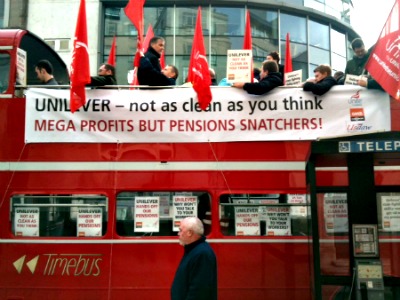 In a letter to Unilever shareholders issued the day before the rally, McCluskey noted that the pension fund was well funded and contrasted the steep cuts being dictated to retirees with the fact that "In 2010, Paul Polman's total remuneration was 54,236,511 euros, a massive 673% increase on the previous year which itself represented an 87% increase on 2008… Unilever management actions are in stark contrast with the company's corporate social responsibility statements. In autumn of 2010, Unilever announced that it will focus on a sustainable business strategy, the "sustainable living plan." A company's social performance is a key component of sustainability. Throwing workers' retirement security into jeopardy and attacking them when they exercise their basic rights does not create a motivated workforce." The union urged shareholders to press for a return to constructive negotiations. 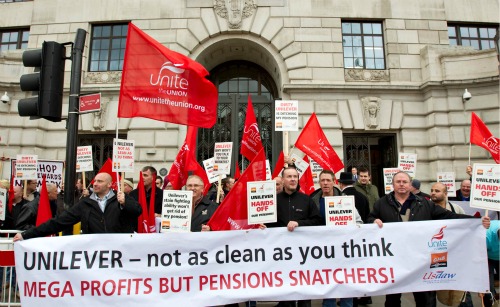