Management at 3 Accor hotels in Canada - Novotel Mississauga, Novotel Ottawa and Novotel North York - continues to retaliate against union members and supporters by disciplining and sacking them. Despite fierce management opposition, workers at the hotels are committed to winning recognition and bargaining rights, supported by UNITE HERE.

The hotels are part of the French-based Accor Group, which in addition to Novotel has the Sofitel, Mercure, Ibis and All Seasons brands, among others.

In 2009-2010, workers at the Novotel Mississauga, Novotel Ottawa and Novotel North York demonstrated strong majority support for union representation by signing union cards, but representation was frustrated by a concerted management campaign to compel workers to vote 'no'. Union-busting consultants were brought in, captive meetings were held, and to bring home the point, active union supporters were sacked, disciplined and punished through reduced shifts and other forms of discrimination. .In the face of these attacks, union supporters at the Novotel North York decided to wait for a sign of management non-interference to press ahead with the certification process. They are still waiting.

UNITE HERE has filed dozens of complaints for labour law violations, but the process is subject to endless delays. In October 2010, the IUF filed a complaint with the French National Contact Point for the OECD Guidelines, alleging gross violations of the Guidelines' provisions on trade union rights. There as well, workers are still waiting, as the process proceeds at a glacial pace. 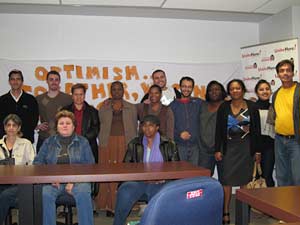 What has been Accor's response?

On October 7, one of the leading union activists at the Novotel Mississauga, Ignacio Dadap, was disciplined for... distributing a leaflet to his co-workers announcing the results of Augiameri's confirmation of majority union support!

When the results of the independent representation verificatio

n were announced on September 20, Novotel Ottawa room attendant and union committee member Esperance Umwizaninde (right) said "We signed everyone up again on new cards this year to show Novotel that we're never going to give up until we win our union. It seems Accor is trying to scare us into giving up. They've fired some of us. I was given a final warning last week. No matter what the company throws at us, we will not stop until we have our union.

Three of the most visible union leaders at the Novotel Ottawa were suspended on the same day.

Phillipe Polquin (left), a server in the restaurant, was disciplined for "soliciting" for the union on September 23 and again on October 13, leading to a suspension on October 14.

UNITE HERE's latest filing with the Ontario Labour Relations Board denounces "The decision to attack known union organizers and persons involved in the organizing campaign simultaneously, in Ottawa, North York, and Mississauga", as evidence of "a concerted, willful and unlawful campaign" to defeat union organizing in the province.

Accor workers in Canada need your support - click here to send a strong message to Accor! Tell the company that violations of basic trade union rights will not be tolerated, and that they should immediately recognize the union at these hotels. Union supporters who were fired since the organizing campaign went public must be immediately and unconditionally reinstated, and those who have been victimized through lost shifts or hours must have their pay and conditions restored.