Following a strike vote in which the NUW membership at Vitasoy Australia voted overwhelmingly in favour of industrial action, NUW members went out on strike for 24 hours on Friday, 30 September. They will organize further rolling industrial action the following weeks.

Since June, the NUW has been in negotiations with Vitasoy for the renewal of the CBA at the factory in Wodonga, Victoria. The issues that have led to a deadlock - and to the first-ever strike vote at the company - include equal pay and rights for sub-contracted workers and restrictions on the NUW's ability to communicate with delegates and workers.

In a letter to Vitasoy CEO Larry Eisentrager, informing him of the strike vote, NUW National Secretary Charley Donnelly reminded him of the company's shameful refusal to recognize and bargain with the Hong Kong Vitasoy Employees Union at the Vitasoy plant in Hong Kong (-> previous story).

He went on to say, "Neither the NUW nor the IUF can accept a situation where a company like Vitasoy refuses to recognize the right of their workers to form a union and bargain collectively. Both organizations call on Vitasoy to recognize the Hong Kong workers' fundamental human rights as recognized by the ILO."

For legal reasons, the union was not able to include a clause in their CBA proposal extending coverage to the Vitasoy workers in Hong Kong, as they had undertaken to do, but the issue continues to resonate amongst Vitasoy Australia workers as they fight the company's attempts to lower standards for workers at their plant. 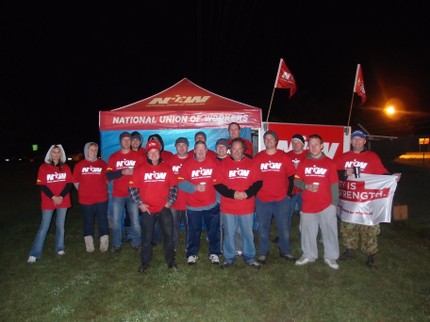 NUW members at Vitasoy on strike on 30 September.