60 employees of the Boathouse Restaurant in New York’s Central Park walked off their jobs on August 9 and were joined on the picket line by 37 of their co-workers who were illegally terminated in retaliation for organizing a union. Boathouse workers began organizing in 2009 because of very low wages, stolen overtime pay, long hours, no benefits, unsafe conditions, rampant favoritism, sexual harassment, ethnic discrimination, and extremely abusive managers.

70% of the Boathouse staff signed union cards in January, and on January 27, the union petitioned the United States Government to hold a union representational election. Boathouse management immediately launched a campaign of terror against the employees.

Management fired 37 workers (26% of the staff) because of their support for the union. In one incident alone, management fired 14 banquet servers (half the department), who were open union supporters, without accusing them of any misconduct or poor performance.

Management has also aggressively intimidated and threatened the remaining union supporters. Management has held countless mandatory anti-union propaganda meetings with employees, threatening to punish anyone who supports the union. 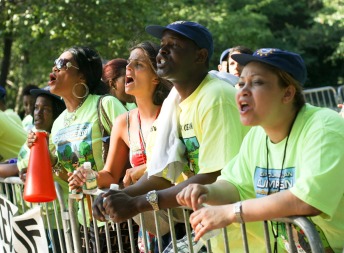 Almost the entire Boathouse staff are immigrants, and management has carried out a concerted campaign to frighten and demean those employees. The company recently began selectively, and illegally, checking employees’ immigration documents. Management suddenly fired several long-term employees for paperwork problems that were never previously an issue.

Most of the employees hired to replace the illegally terminated workers have been told they are only temporary and will be fired at the end of this year’s busy season. Many of the new temporary employees are ex-convicts newly released from prison. They have been falsely told by managers that going on strike could violate the terms of their paroles and cause them to go back to prison.

The Boathouse is owned by New York City and Dean Poll has a very poor record as its contracted operator. An audit by the Comptroller of New York City found that Poll had cheated the City out of $609,923 in its share of the restaurant’s revenue, and illegally confiscated more than $3 million dollars in banquet gratuities from employees. The Boathouse also repeatedly fails health inspections. Many important elected City officials have called on the Parks Commissioner to intervene on behalf of the workers.
.
Now, after terrorizing the workforce, Dean Poll, is calling for a “free and fair election” to decide whether the workers can have a union.

Union President Peter Ward responded, “Dean Poll’s idea of democracy is that he has the right to eliminate the voters of his choice, and hold a gun to the heads of any survivors. That’s not democracy. That’s dictatorship.”

Under Poll’s contract, the Parks Commissioner has the right to fire Poll at will and replace him with a different operator to manage the restaurant. To support the workers, make sure you tell anyone you know in New York about the boycott and click here to help the union petition Parks Commissioner Benepe to let him know that we want him to terminate Dean Poll's lease with the City.